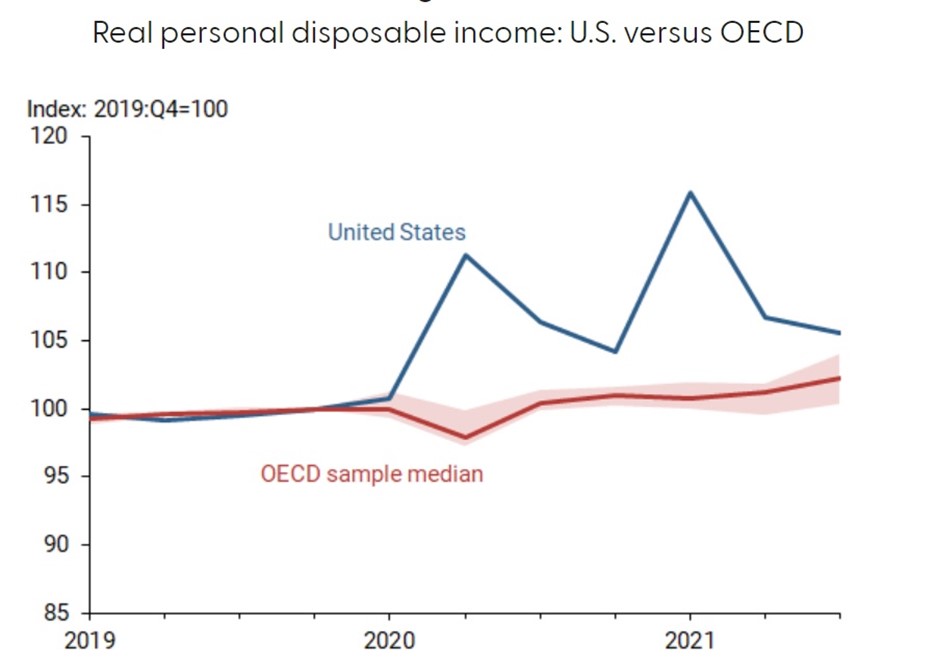 An article in Reason magazine says that the COVID stimulus checks sent out by the Federal Government worsened inflation inn the US compared to other wealthy nations.

ECB chair Christine Lagarde echoed this sentiment today on CBS Face the Nation, where she said that the European approach of allowing workers to keep their jobs during the pandemic had turned out better than the US approach of just handing out money.   The Europeans spent only about half of what the Americans spent, and when the pandemic ended, the European labor market was more stable than America’s.

The Reason article was based on a paper by four economists at the Federal Reserve Bank of San Francisco.  Their report said, “However, since the first half of 2021, U.S. inflation has increasingly outpaced inflation in other developed countries. Estimates suggest that fiscal support measures designed to counteract the severity of the pandemic’s economic effect may have contributed to this divergence.”

Governments all over the world spent heavily to combat the pandemic, of course, but few handed out cash directly to citizens as the American government did. The four Federal Reserve researchers track sharp increases in “inflation-adjusted disposable personal income”—in layman’s terms, excess spending cash—reported by American households over the past two years. “Throughout 2020 and 2021, U.S. households experienced significantly higher increases in their disposable income relative to their OECD peers,” they write.

About $817 billion in direct payments to American households were delivered in three rounds during the pandemic,…  much of that $817 billion landed in the bank accounts of people who had never lost their jobs and were well above the poverty line.

The four economists conclude that “U.S. income transfers may have contributed to an increase in inflation of about 3 percentage points by the fourth quarter of 2021.”